Fiftieth Anniversary of the Crown of the Parish of Guadalupe

The crown of the parish of Guadalupe was celebrated fifty years after its inauguration. Since then, that December 12, 1965. 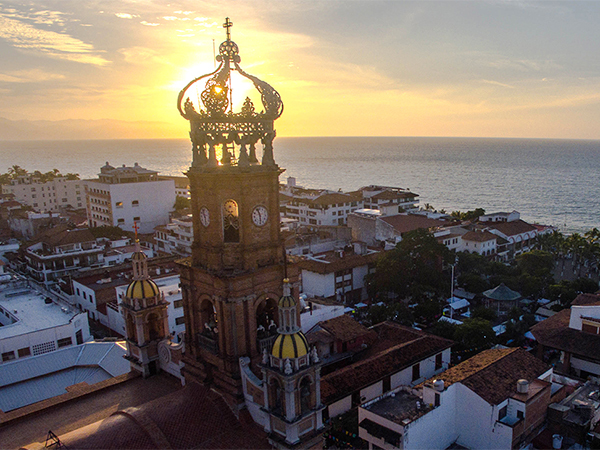 The crown of the parish of Guadalupe was celebrated fifty years after its inauguration. Since then, that December 12, 1965, became an object of predilection of the visitors, who have taken their photographs to the whole world as a souvenir of their stay in Puerto Vallarta. That is why it is rightly considered as one of our main tourist attractions.

The parish priest Rafael Parra Castillo wanted to finish with a symbol of the Virgin of Guadalupe the tower just finished and considered that the most appropriate would be a crown, since the final invocations of the litany of the rosary praise it like queen. He then ordered the sculptor José Esteban Ramírez Guareño to be called, and gave him his idea of ​​the role of a cement sack.

To design the order made by Father Parra, the master Jose Esteban took as reference the imperial crowns with which he was honored in his basilica of Tepeyac to the Virgin of Guadalupe in 1895 and in 1945. The sculpture that he created is, in effect , an imperial crown formed by a collar and a bonnet with eight segments, whose apex consists of a sphere culminated in a cross.

The original casting of the crown was made between 1963 and 1965 by the marble worker Emilio Campos, who made on the ground the different sections using concrete reinforced with rods; these sections were then assembled in their final location under the direction of master mason Lino Mercado and his assistants. The cross, the sphere and the anchorages of the crown and the angels were the work of Esteban Ávalos Haro, who had previously forged the blacksmithing of the windows and the railing that runs inside the temple.

These craftsmen made the project of the master Ramírez Guareño according to the possibilities with which they had in their different offices. Thus, for example, the angels, instead of holding the crown flying, as master Ramirez wanted, do so on foot, and thus continue the constructive function of the columns attached to the second body of the belfry.

The erosion and the intemperances of the time forced to restore the crown in 1981, work that promoted and it headed Miguel Angel Valdés Mora. Unfortunately, erosion had already internally damaged the rods that were making the bonnet, so that the earthquake of October 9, 1995, left only the angels holding and the quiver.

Since the crown was a universal attraction for tourists, authorities and business organizations supported installing a temporary fiberglass patch. The material used did not withstand its own weight and was overcome, so that the segments were deformed, altering the original profile and volume of the crown for several years.

Finally, although the master Jose Esteban Ramirez Guareño left in the parish of Guadalupe two models in bronze of the crown, were not taken into account for the realization of the third emptying of his work, finished in 2009 by the master Carlos Terrés. This third casting in “terroca”, which is the one that now exists, also alters the original profile of the crown, although less than the previous fiberglass patch.